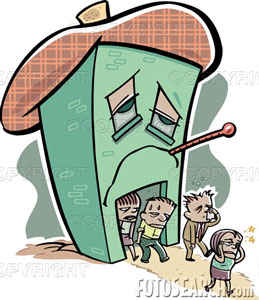 Crawl spaces with water problems require vapor barriers on top of the dirt floor.  Sump pumps and additional vents may also be needed.

Moisture control is a major concern associated with installing thermal insulation. The warm air inside your house contains water vapor. If this vapor passes into the insulation and condenses, it can cause significant loss of insulating value and promote mold growth.

Sufficient ventilation in the house is also important in controlling moisture in a building.  This is particularly important in the basement, crawl space, and attic.  Besides controlling water vapor, proper ventilation reduces the build-up of gasses such as carbon dioxide which is produced during respiration and fuel combustion.

The use of humidifiers is not recommended, as most homes in the Mid-West do not need additional humidification. If the humidifier is not properly maintained, other health problems can occur.  Venting clothes dryers into the house may also cause problems such as excess humidity and condensation.

Turn-Key can help you access all factors that affect the healthy environments.

By Linda Treasure on May 19, 2017   /   Sick Building Syndrome
Schedule your appointment with a certified profressional today!
Free Estimate