TKEC was contracted by a manufacturer located in southeastern Ohio to assist in investigating spills of chemical(s) of concern (COC) that occurred on their property in the 1970’s and 1980’s. The plume from one spill extended under one of the buildings and another plume was encroaching on the drinking water wellfield of the local municipality.

Following a Consent Order from the OEPA in 1992, this investigation consisted of installing a network of groundwater monitor wells, performing groundwater level measurements and sampling the groundwater for the COCs. A series of monitor wells were installed by others to verify the presence of the plumes. 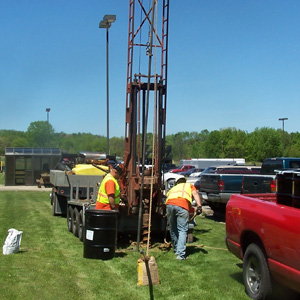 TKEC became involved in 2003 and installed additional monitor wells to define the vertical and horizontal extent of the contaminant plumes. Over time, at least fifty (50) monitor wells were installed at various locations on the property and in the surrounding neighborhood. TKEC also installed additional wells for augmenting bio-remediation activities. Wells and piezometers owned by the local municipality were also routinely monitored as a part of this investigation.

TKEC has performed semi-annual measurements and sampling of the monitor well network at this site since 2003. Natural attenuation and enhanced bio-remediation has significantly reduced the contaminant levels in the plumes. The contaminant reduction was evidenced in recent negotiations with OEPA which resulted in a reduction in the number of the monitor wells to be sampled as well as the frequency of the sampling.

If you experience a release at your site, TKEC’s team of project managers can assist you in defining the extent of the affected area through soil borings and installing monitor wells for testing the groundwater at your facility. TKEC can also design and install appropriate remediation systems for addressing soil and groundwater contamination at your facility. Sampling and monitoring activities can be performed by a variety of methods to document the constituents in the soil and groundwater at your facility and report the results to you and/or the appropriate regulatory agency to suit your needs.

Schedule your appointment with a certified professional today!
Free Estimate

Beach sand has a melting point of 3000 F

More than 100 miles of mining tunnels exist under Detroit, Michigan.

Tortoises can crawl about one mile an hour.

Over 20% of all fresh water on the planet is in a lake in Siberia, Lake Baikal

As greenhouse gases rise, Earth’s remaining ice sheets such as Greenland and Antarctica are starting to melt as well. That extra water will raise sea levels significantly, and quickly.

Greenhouse gases are higher now than at any time in the last 800,000 years.

45,000 thunderstorms every day on earth

Hummingbirds visit more than 1,000 flowers every day to keep themselves fed.

Australia’s Great Barrier Reef is roughly the size of Italy.

The Amazon rain forest is about twice the size of India.

Crocodiles sometimes climb trees (Florida has both Crocodiles and Alligators)

One acre of soil can have more than a million worms living in it.

The Pacific Ocean has more water than all other seas and oceans combined.

The tree canopy in the Amazon rainforest is so thick that it takes rain 10 minutes to trickle down to the ground.

A freshwater lake the size of Lake Ontario is hidden under nearly 2.5 miles of ice in Antarctica

The longest living organisms on Earth are trees

If the dormant super volcano in Yellowstone National Park ever erupted, it would likely spew enough ash to cover all of North America.

Hummingbirds flap their wings up to 80 times a second.

Lightning strikes somehwere in the world about 100 times a second

Each year winds blow about 40 million tons of dust from Africa’s Sahara to the Amazon River basin.

Jellyfish can sting you even when they are dead.