In their article Earth Overshoot Day: Living beyond our means, (dw.com) the chart below captures the whole story.  August 8 was the date this year that the earth overshot its available resources for the year.  So it indicates that the amount of nature we used from January 1 till August 8 is as much as the Earth can renew in the entire year.  So it’s as if by August 8 we spent all the money we have for the year.

What are the implications of that long term?  If we keep over using the available resources there will come a time where nothing or very little is available.  The consequences are faced in the future by future generations. 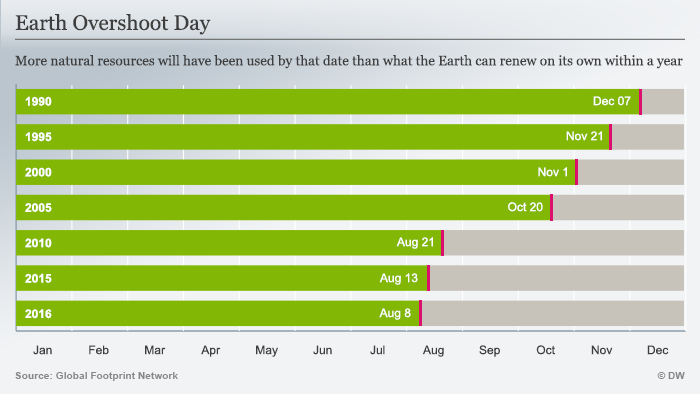 2015 surpassed 2014 as the warmest year since at least the mid-to-late 19 century.  The report found that most indicators of climate change continued to reflect trends consistent with a warming planet.  Several markers such as land and ocean temperatures, sea levels and greenhouse gases broke records set just one year ago in 2014.

The American Meteorological Society released, online, the State of the Climate in 2015 report.  The report, led by NOAA National Centers for Environmental Information is based on contributions from more than 450 scientists from 62 countries.  It provides a detailed update on global climate indicators, notable weather events and other data collected by environmental monitoring stations and instruments located on land, water, ice and in space.

Global mean temperatures in July 2016 were the warmest on record, not just for July, but for any month dating to the late 1800s, according to just-released analyses.

NASA’s Goddard Institute for Space Studies found July 2016 was the globe’s warmest July in their dataset dating to 1880.

These are only small blips on the overall long-term trend of warming, which tips the odds toward record heat and away from record cold. Of the 15 hottest years on record, 14 have occurred in the 21st century, but the last record-cold year was in 1911.

CLIENTS: Some of the great organizations we've been proud to help.