According to a blog by Kaitlyn Fusco on Asbestos.com, natural disasters, industrial accidents, and even acts of terrorism, often scatter hazardous materials, including asbestos, across miles and wide geographical areas.  This often includes dust, soot, concrete powder, lead, from old paint, and hazardous asbestos pollution.

For example, in 2011, an EF5 Tornado hit Joplin Missouri.  As the 200 mph tornado ripped through the community, killing 158 people, injuring more than 1,000 and causing over $2.8 billion in damages, it also spread airborne hazardous materials and asbestos pollution that became not only toxic to the residents of Joplin, but to neighboring communities also. 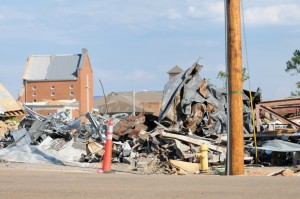 It is important to be aware of these potential hazards and take appropriate precautions, if you find yourself in one of these disaster situations. TKEC offers comprehensive  asbestos consulting services in Dayton, Ohio and all of the greater Miami Valley in Ohio.

By Linda Treasure on May 4, 2015   /   Air Quality, Asbestos
Schedule your appointment with a certified profressional today!
Free Estimate