A New Twist on Climate Change

Climate change activity in a remote part of the world has serious implications for our delicate environment and the air we breathe. 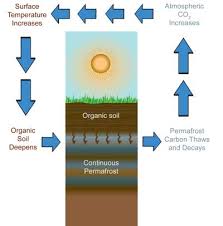 In addition, another concern emerges.  What, if any, are the implications of yedoma entering the food chain?  If large volumes of yedoma are being release to terrestrial and aquatic ecosystems in the Arctic, and we know that it is efficiently digested at the lower food chains, it will eventually make its way up to the higher food chain where organism will be eating organic matter that is tens to thousands of years old.